Meeting between the Korean Society and ISIM, Seoul
October, 2013

Annual Fall Scientific Meeting of the Korean Association of Internal Medicine in Seoul, Korea, October 2013, and Business Meeting between ISIM and the Organizing Committee for WCIM 2014.

In October 2013 the “Annual Fall Scientific Meeting of the Korean Association of Internal Medicine” took place in Seoul, Korea. This outstanding event gathered internists, specialists and young doctors. The scientific programm covered a wide spectrum of internal medicine topics including state of the art lectures, clinical guideline lectures and scientific sessions.The International Society of Internal Medicine (ISIM) was represented by its President, Dr. Rodolfo Bado, Argentina and by the Sectretary General, Dr. Hans-Peter Kohler, Switzerland. Both ISIM representatives gave special lectures: “Pulmonary Embolism Prevention: Are we doing what we should do?”, by Dr. Rodolfo Bado, and “Population Ageing and Multimorbidity”, by Dr. Hans-Peter Kohler. In addition to the scientific meeting both ISIM representatives took part at an official business meeting with members of the Organizing Committee for the 32nd World Congress of Internal Medicine which will take place in Seoul in 2014. The business meeting was complemented by a COEX site inspection with WCIM 2014 President, Vice President, Secretary General, Chair of the Scientific Program, and the Chair of the Planning Committee of WCIM 2014. The congress facilities to host WCIM 2014 were impressive. 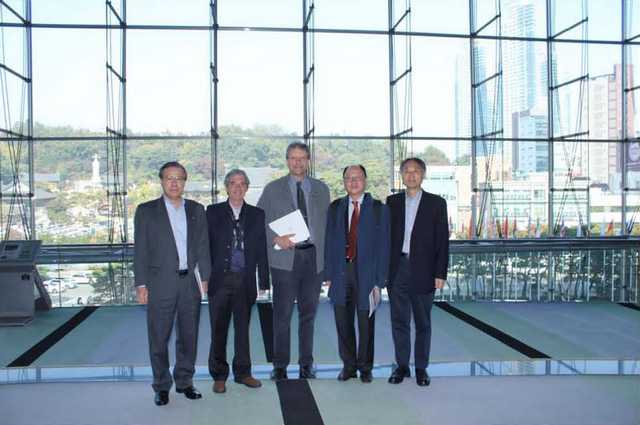 Impression from the COEX site inspection