The Republic of Northern Ossetia is one of the Northern Caucasian Republics of the Russian Federation. Its neighbours to the East are Ingushetia and Chechnya, to the South Georgia, and especially to mention South Ossetia (a contested part of Georgia), to the West Kabardino-Balkaria, and to the North the Stavropolski Region. Vladikavkaz is the capital of Northern Ossetia; it has roughly 400’000 inhabitants, most of them Christians (Russian Orthodox denomination), but also many Muslims. In the 19th century Vladikavkaz was a very important military stronghold, because it was the starting point of the famous Georgian Military Highway to Tbilisi, crossing the Caucasus mountain range via the «Krestovy pass». The word «Vladikavkaz» means «Ruler of Caucasus». During the times of Soviet Union the city was called Ordshonikidse, according to one of the early Georgian members of Stalin’s government.

Northern Ossetia and Vladikavkaz had to carry their burden during the two Chechnyan wars: the Republic had to host many internally displaced people from the war zones. Of course, the most devastating event was the terrorist attack on the Beslan School on September 1, 2004, where more than 300 people, most of them children were killed. SDC has set up a very successful program for the mental rehabilitation of the children, who survived the attack.

Vladikavkaz is the seat of the State Medical Academy of Northern Ossetia. It was founded 65 years ago. This is the only Medical School in the Northern Caucasus and is training Medical Doctors and Dental Surgeons for all Republics of Northern Caucasus. More than 2200 students are learning in the Academy in a curriculum lasting 6 years. One of the biggest problems the faculty of the State Medical Academy is facing is a lack of professional exchange with Western colleagues, partially due to heavy financial restrictions, precluding attendance to international meetings and subscription to international medical journals, partially also due to language barriers, because only few faculty members are fluent in English.

The International Society of Internal Medicine (ISIM) is a federation of 62 national societies of internal medicine from all over the world. The largest Society Member is the American College of Physicians with more than 120’000 members. Very large Members are also the Japanese Society of Internal Medicine and the Royal College of Physicians in London. The Russian Society of Internal Medicine is a Member Society as well, but is not well functioning at the moment. I am the President of ISIM for the period of 2006–2008. One of the activities of ISIM is the organization of Postgraduate Courses in Internal Medicine for countries without access to Western Medicine, especially for the countries of the former Soviet Union. These courses are always very well attended and successful. The idea behind these courses is the following: It may be more efficient to bring the teachers to the place in need than to invite the physicians to Western congresses, which is much more expensive and boroughs the risk that only old apparatchiks will profit. ISIM covers the costs for transportation and lodging of the lecturers, and the local organizers provide all invitations, technical equipment and translation. The Rector of the State Medical Academy of Northern Ossetia expressed his desire to host one of those Postgraduate Courses in Vladikavkaz in September of this year.

I was able to rise CHF 30’000.– from OPO-Foundation to finance a Postgraduate Course in Vladikavkaz. The preparations for the course started in spring 2007 with the recruiting of lecturers. This was not easy because several possible candidates refused to fly to this region, witch most people know from bad news in the newspapers. Finally, I committed a group of five professors of medicine and the Treasurer of ISIM, who was to accompany us to regulate all financial questions. The delegation consisted of the following persons: 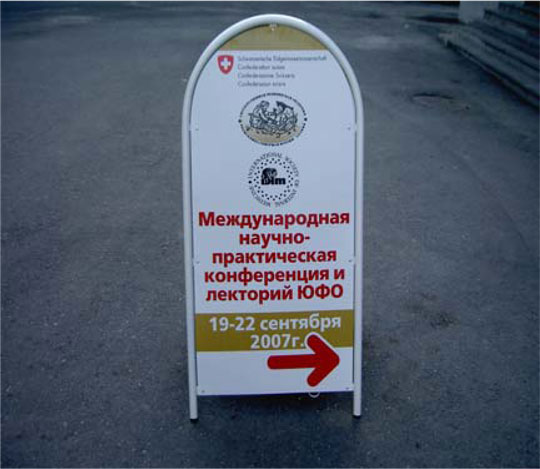 The five lecturers prepared their talks and sent their PowerPoint presentations to me. I forwarded them to the COOF in Vladikavkaz, where they were translated into Russian. Every member of the delegation received a personal invitation by the North Ossetian authorities, which allowed obtaining a Russian visa. This process worked out without any problems.

2. Purpose of the Mission

The whole delegation met at the airport of Zurich on 18 September 2007 and flew to Moscow Domodedowo by Swiss. We had to spend one night in Moscow at hotel Belgrad. On the next day we flew from Vnukovo to Nalchik, where we were met by Peter Mikula and Dr. Khassan Dzgoev, National Program Officer. Escorted by a police car in front and by a car with plainclothes security personnel in the back we were driven to Vladikavkaz at a velocity of 120 km/h clearing the street with sirens and loudspeakers. In Vladikavkaz high representatives of the North Ossetian Government and the press corps received our delegation in the government building. Afterwards we were invited to an official dinner. Back in the hotel Victoria, all speakers had to carefully co-ordinate their slides with the Russian translation, because it was planned to show all slides in parallel simultaneous English-Russian projection. Dr. Khassan Dzgoev had then to work on the slides until 2 a.m.!

On Thursday, 20 September 2007 we were brought to the State Medical Academy, where everything was well prepared. The first participants were already arriving and registering for the course. There was an exhibition of pharmaceutical companies, attracting the physicians arriving early in the morning. First the lecture hall had to be screened by a police dog trained to detect explosives.

The official opening of the course was set to 9:30 a.m. The vice president of Northern Ossetia, as well as the rector of Northern Ossetian Medical Academy welcomed the participants, and the course began in time. The big auditory was filled to the last seat, several physicians had to stand. We counted 400 participants; most of them young physicians and students, the majority were females as typical for the Russian Federation. The physicians arrived from as far as Rostov-na-Donu by night train. We also welcomed many doctors from Chechnya, Dagestan and Ingushetia. They all were very grateful to have the possibility to meet colleagues from Western countries and to be brought up-do-date by them after so many years of sequestration. All lectures were translated from English to Russian, sentence by sentence by faculty members of the foreign language department of the Academy. They did an excellent job! The double projection of the slides with two beamers also worked excellently – on the left side the English slide and on the right side the Russian slide. After each lecture there was time to ask questions. The auditory keenly made use of this chance, there were very vivid discussions. The long working day was interrupted by coffee and lunch brakes.
COOF Vladikavkaz will prepare CDs and textbooks with all lectures, which will be mailed to all participants.
At the end of the conference, we had the pleasure to enjoy an excellent folklore performance by students of the academy.
On Friday, 21 September 2007, the delegation was brought to Tsei up in the Caucasus. There we visited the Search and Rescue Center run by Emercom and supported by SDC.
After a visit to the holy place of Tsei we descended to Beslan, where we honoured the victims of the terrorist attack, which happened almost exactly three years ago.
We were shown the activities of the SDC funded project in the Sport Center of Beslan and the psychosocial therapy lessons.
In the evening we were shown the huge 600 bed new hospital of Beslan, which is funded by the Russian Federation and will be equipped with the most modern medical machinery.
On Saturday, 22 September 2007 we met again the authorities of State Medical Academy for a debriefing. They were very satisfied by the Postgraduate Course and the echo from the participants was unanimously good. The authorities expressed their wish to continue these endeavours and possibly have a similar event again in Vladikavkaz or in Grosny in the next two ears. I accepted this proposal and told them that the International Society of Internal Medicine will certainly think it over. Towards noon we were brought to Mineralnye Vodi and we then flew back to Moscow.
On Sunday, 23 September 2007 the delegation was invited to the Embassy of Switzerland by HE Ambassador Erwin Hofer together with distinguished guests from the Moscow medical community.
The delegation returned back home on Monday, 24 September 2007 with Swiss International Airlines.

The medical community in Northern Caucasus has suffered and is still suffering from the consequences of the two wars in this region. The Medical Academy is isolated and has not much exchange with the rest of the world. Therefore the Faculty of the Academy very much welcomed an International Postgraduate Course in Internal Medicine.
The course was attended by about 400 participants coming from the whole Caucasus region and even from Rostov and other Southern regions of the Russian Federation. The echo was enthusiastic and the discussions after each lecture vivid. This shows that there is a big need for such events in this deprived region. Of course the main purpose of the course was to improve general medical knowledge and to bring the colleagues up-to-date in modern aspects of Internal Medicine. But certainly a very important side effect of the event also was its psychological impact: Our colleagues stressed in many talks we had with them, that it was of utmost significance to them to feel that they are not forgotten by the rest of the world. I also was impressed by the peaceful sitting together of Christian and Muslim colleagues coming from all Republics in Northern Caucasus. I believe it is not exaggerated to pretend that this course was also a peace promoting event!
As President of the International Society of Internal Medicine I will do my best to establish a continuation of this endeavour.